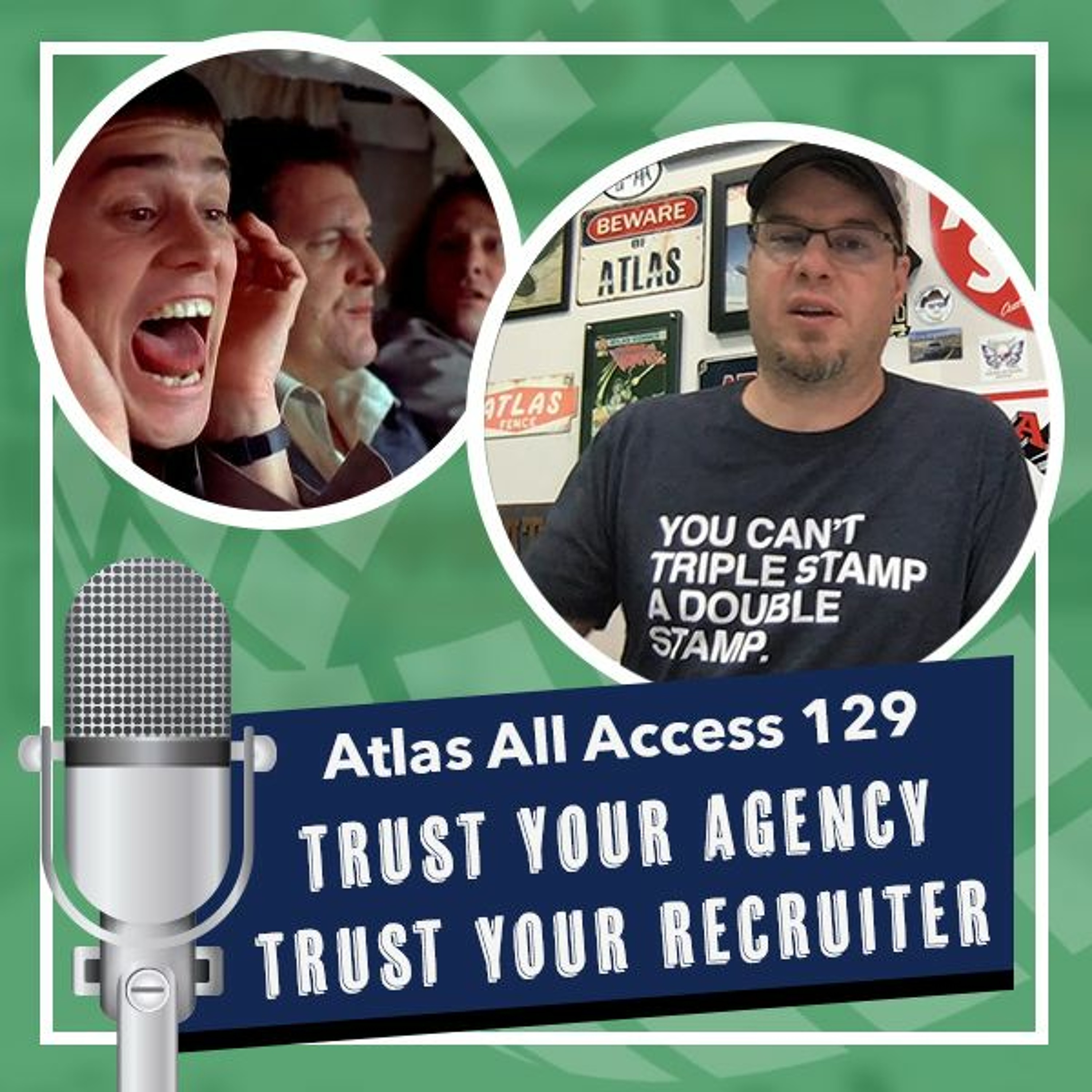 Trust your agency, trust your recruiter - Atlas All Access 129

Trust your recruiter and your agency. If they've always been there for you, listen to them over the internet noise.

We love the Internet! But we also know that while eternal vigilance is the price of freedom (attributed to Thomas Jefferson), replying to a contentious comment thread with a gif of Darth Vader screaming "Noooo" is the price of dealing with internet trolls.

Don't trust everything you read online.

We've seen waves and tumultuous storms like this in the industry before. And this, too, shall pass. It's just obnoxious while you're on the boat rocking away in the storm -- we get it.

Tune in to check out some unfiltered industry insights in this episode of "Atlas All Access". How do you filter out internet trolls? How do you win an internet argument? And what can you do to weather the storm now that jobs are back?

Go back to the people and the agency that you trust. You should be able to trust them enough to take something to them you have seen online, and simply ask them, "Is this legit?"

They would much rather help you navigate those waters than drift off course because of a persistent troll.

Rich Smith: First things first. I wore this shirt for a reason today. This comes courtesy of, I want to call them my friends, I only know them in passing, obviousshirts.com. They're out of Chicago. They do a lot of baseball shirts or whatever. Clearly this is from Dumb and Dumber.

Rich Smith: What does it mean? And why is it important and relevant right now? And I'll tell you why. There's just a lot of bad information out there. And it's not because people are being malicious, and it's not because people want that bad information out there, it's just how we are. In the cycle of everything that's happening right now. Having been in this industry for 16 years and understanding the cycles of how things work, you can almost take this to... Our controller, Monte came from a different industry. He came from the trucking industry. Which there could be some parallels along the way in hiring and that type of thing, with short term contracts, that type of thing. There are some parallels. What he said today was, to me, made a lot of sense.

Rich Smith: When you send a truck out with a full load... My dad was a trucker at the end, by the end of his life, his last job, he drove trucks. They would go out with a full load. It doesn't make any sense for them to bring back an empty one, right? So you'd have to then contract to bring that truck back with a full load. See how that makes sense. You go out to full load, you pick something up, you bring it back. You're not driving an empty truck back. That doesn't make a lot of sense, and it costs twice as much if you're just taking that full load and then driving back empty. That's just how it goes.

Rich Smith: What does that have to do with nursing? Nothing at all, nothing whatsoever. However, it disrupts the supply chain. If there isn't a load to bring back. In our case when there were zero jobs and now there's 7,000 on our end, and some companies have more, quite honestly, some of the larger companies have more jobs open, but they were in the same boat as we were a couple of months ago when they had very, very little jobs. It disrupts the supply chain, so to speak. And it's changing things.

Rich Smith: Luckily it happened about the same time where you could still take that contract that ends you right before Thanksgiving, Christmas. You still take Thanksgiving, Christmas off, then you're ready to go in January. That kind of still exists. But I have a feeling the flu season is going to disrupt that even more and it's going to push contracts even further. And so it's not going to happen anymore. So you can't triple stamp a double stamp, arguing online. And that's happening so much right now. Because of (1) where we are in the industry, and (2) just the giant influx of, not only new agencies since 2008, since the downturn of 2008, a number of agencies have joined the ranks and started posting jobs. And that's fine. I'm not arguing against that whatsoever. I've never had an issue with someone legitimately going out and, you know, hanging their flag and saying, I've got jobs available here, legitimately. I've never had an issue with that.

Rich Smith: But the number of new agencies posting jobs, and then the number of new travelers. Because our industry has changed so dramatically, where it wasn't just a choice. It was just a choice back in the beginning. When I first started early 2004, it was a choice. It was retired nurses that were doing this. Now this is any number. Our average age has gone down so dramatically that it's from two years experience all the way to 25 plus years experience that are traveling. So the knowledge gap may have, don't get me wrong, the knowledge gap has changed.

Rich Smith: All of a sudden COVID jobs show up average bill rate shoots up. And then all of a sudden, within a little, very short window jobs close, and it goes down to virtually nothing. And we'd go into a very dark month and a halfish, maybe two months worth. And then all of a sudden healthcare catches up. Patient loads catch up, and we see that increased demand equals increased bill rates. We can see it. Is it going to stay like that? I don't think so. Enjoy it while it lasts. Take the contracts while it lasts, because I can tell you, after 16 years, there is a cycle to all of this. It cycles through just like everything else. So what does that mean in the next year? Don't know yet? I wish I had the magic 8-ball. That'd be super awesome, but I don't.

Rich Smith: All I can tell you is the cycle eventually catches up, and we will go back to where we were before. I've seen it. I lived through 2008, 2009. I've seen it happen. It was horrendous back then. It was bad. It was worse than what it was just a couple of months back. And the cycle came back. So I can assure you the cycle comes back. What does that have to do with you can't triple stamp, a double stamp, arguing online. I love the internet. I do. I love Facebook. I love Instagram. There are some though, in our industry, that will argue just to argue, and they know they're either right or wrong. They're indifferent. They don't care. They just want to argue. And that's what you can't triple stamp, a double stamp.

Rich Smith: Whether you believe it to be true or not, arguing online isn't going to get you anywhere. It's not going to change where we are right now.

Rich Smith: Trust the recruiters that you work with. Trust the agencies that you work with. And this isn't a trust me, trust Atlas. You may not work with us. You may work with TaleMed. You may work with American Mobile. Whatever you choose trust that they are telling you, if they've never given you a reason to not trust them, trust what they are telling you right now. Especially if they've been in the industry for a while. They have seen this before. We're going to see it again. And we, I bought myself in with them, we will see it again. Trust what they're telling you.

Rich Smith: Arguing with just another faceless person online. That's on a contract someplace else, or who even knows who they are, isn't going to do you any good whatsoever. You can't triple stamp a double stamp. That's just where we are right now. Go back to the people that you trust in the industry. Go back to the company that you trust with your professional license, when they send you to a contract and listen to them over the talking heads online. No matter how much we love the internet, no matter how much we love Facebook. I mean, cat videos are funny, but cat videos, don't get you a job and cat videos, don't take care of your professional license when you're on a contract. That's all. That's the easiest, best explanation I have for that.

Rich Smith: Fun information next week. We are going to talk to the wife of a traveler who lives in an RV, who homeschool their kids while their husband, traveling nurse, works a contract. How does that work? I mean, we're going into a very uncertain time with school starting back up in a COVID-19 world, who knows how long it's going to start, who knows what's going to happen? This wife, traveler has been homeschooling their kids for a number of years now, and will have a lot of tips on what to do, how to do it, how to structure your day. And I think you'll be surprised. It's not what you would expect. We'll see you next week.