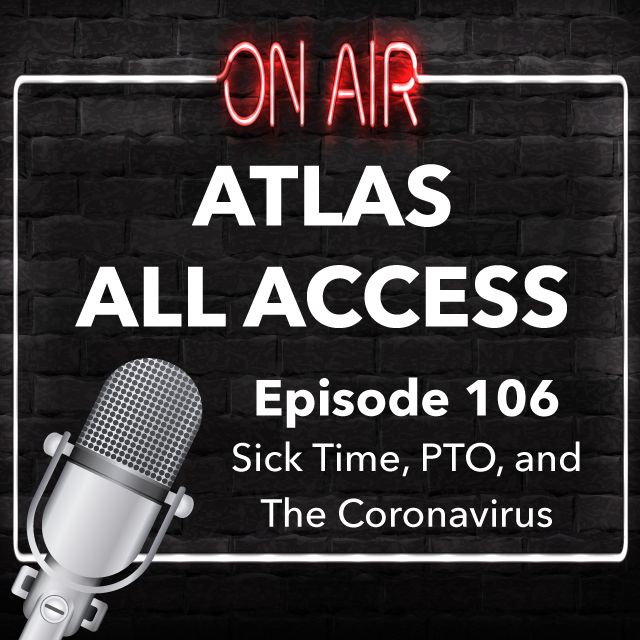 What happens when you get sick on contract? How does PTO work? How do you deal with the Coronavirus / Wuhan Virus / COVID-19, or a similar "big news" illness making headlines?

We answer all of these questions and more in this week's episode of "Atlas All Access".

Rich Smith: This Episode of Atlas All Access is brought to you by Emergen-C and Zicam. Okay, not really. Please don't sue us.

Hannah Bryant: But if they want to pay us to sponsor, we sure will.

Rich Smith: I'd love to have sponsors.

Hannah Bryant: Rich has some positive comments on that. He's been using it a lot lately.

Rich Smith: A lot, a lot. Make this like a tea and you put it in hot water. It's delicious.

Hannah Bryant: There you go. Just sip on it all day.

Rich Smith: So you can hear it in my voice a little bit. Right?

Rich Smith: On this episode, we're going to talk about paid time off, what happens if you get sick, and all the stuff around that because it's inevitable it's going to happen.

Hannah Bryant: It is, unless you're a mom, then you're never the one that gets sick.

Rich Smith: Atlas All Access starts now. Hannah Bryant joins us again, recruiter extraordinaire. And I asked Hannah to come because I think she explains this better than any other recruiter that we have right now. What happens if you get sick on a contract? And there are some companies that offer paid time off, so you could use that time. We have chosen not to offer that. So let's talk first about why we've chosen not to offer paid time off and because of that, if we did, how it would affect your pay package in a negative way.

Hannah Bryant: And so this is, I use my pie example a lot in a lot of different ways. But I think I'm a visual learner, so it makes the most sense for me. I always think of your pay package as the whole pie. The whole pie is the bill rate. We have taxes taken out of here, what the company has to pay for that, these taxes taken out, what the nurse has to pay for that, you're taxed hourly, per diems, stipends, and then the company's profits right here. So the pie's already split in a lot of different ways. If we were to, once again, this money all comes from somewhere. It's coming from the bill rate, it's coming from the hours that you work that we build a hospital for. Divide the pie up, pay you.

Hannah Bryant: So if we were to offer you sick time, PTO, here's a piece of your pie that's gone. The issue is if you don't use it, we're not giving you that piece of pie back. And there are a few nurses that would like that reserve. But I think the popular vote is, no, I'd rather see my whole paycheck upfront every week than for you guys to hold a piece back of that pie for the possibility that I might get sick.

Hannah Bryant: Or I might need that time. Now we do offer bereavement. And then state specifically, we have to offer sick time in some states. And that is built into your pay package. If you're in Washington, you know there is this amount of money set aside for that sick time.

Rich Smith: But that's state law versus what we choose.

Hannah Bryant: Yeah. We have no choice there.

Hannah Bryant: But really, I'm of the same thought process too. I'd rather see my whole paycheck. I don't want you holding it back for the possibility that I might need it. And often, those companies offering incentives like that, maybe they're also, that company's guaranteeing hours, even though the hospital has a call off policy. So once again, here's your piece of the pie that they've taken out. And maybe you are going to use it, maybe you're not going to use it. It's a risk that you take. But oftentimes, that's 36 hours. That's one week of your paycheck, so that could be anywhere from $12 to $3000 that they just took from you that you may not get back.

Rich Smith: Right. And that's kind of, Hannah explained it perfectly. That's always been our stance, is your check is your check. And we want you to see where every single dollar of that goes. And so that's why we've chosen not to.

Hannah Bryant: And it's the spirit of transparency too. If we're just saying, "Oh, yeah. You have guaranteed hours. You have this sick time available to you," then we're not being 100% transparent with you. I was about to say honest, but that's not fair. We're not being transparent in where that money goes, where those pieces of the pie go. It would be better for us to be upfront and explain the call off policy before you're submitted to a job. And you would know then the possibility of getting called off, or where that piece of the pie goes, and maybe seeing that money for PTO, maybe not, depending on if you use it.

Rich Smith: Okay. So knowing what you know now, let's say you are on a contract with us and you do get sick. So I was out yesterday. Yesterday, I thought I was going to die. It was bad. And maybe it's just man flu. I don't know. It probably was. Quite honestly, it was-

Rich Smith: It was bad. And I mean, it's still, you can still kind of tell, coughing and whatever. You don't want to go to work and infect others.

Rich Smith: Absolutely. Right. So you do get sick at work. How do you make up those hours? Or what's the best way to go about making sure that you get the hours that you're supposed to get every week even though you were sick?

Rich Smith: So I think out of that just comes communicate.

Hannah Bryant: Right. And if we're talking about extreme sickness like, this isn't going to happen to you, but let's say this turns into pneumonia and you're in the hospital, then we do have that supplementary plan as well for to pay you. I think it's $300 a day for the days that you cannot work because you're hospitalized. You have to be admitted into the hospital. But that would be an extreme situation.

Hannah Bryant: There are sicknesses that are out of our control, like appendectomies. I know that policy and plan has been useful to nurses who have emergency procedures like that. At least it's something. $300 a day, three day stay, that's $900 that you wouldn't have otherwise had. And it's less than a cup of coffee a week. I think it's $5.

Hannah Bryant: And it's in the forms library on ADP if you're an active traveler.

Rich Smith: There we go. Okay. So then last question. And this actually just came up in an email. And without being too alarmist, everyone's talking about the coronavirus. Right? I mean, it's everybody's talking about it.

Hannah Bryant: Yeah, they're all here in Nebraska too.

Rich Smith: Right, they're not too far from us in Ashland over here.

Hannah Bryant: Have you seen that meme about the bubble wrap?

Rich Smith: I have, yes. If you pop the bubble wrap that came from China.

Hannah Bryant: It is.

Rich Smith: So don't do it. So let's say something like this happens, or SARS before that, or the bird flu before that. I mean, all of these things-

Rich Smith: Absolutely. And I guarantee we've had ER nurses that are working right now, where some patient has come in sounding like me and said, "Oh, no. I've been exposed. I have the coronavirus." You don't.

Rich Smith: You don't have it. But how do you deal with that? I don't want to say hysteria.

Rich Smith: Because that's not a thing yet.

Rich Smith: But how do you deal with that? And then how do you work through maybe some of the negative stigma that might come with working in a healthcare facility when something like this happens?

Hannah Bryant: I would assume that a lot of nurses are wearing masks right now. A, because it's flu season, B, because of, especially in the ER setting. So I think they're already taking that protective measure. But then the hospital's also going to have policies and procedures in place for these types of situations, especially some of our hospitals who are getting those patients. They have very strict procedures in place to protect the nurses, the patient, and the general population.

Hannah Bryant: So yeah, just always divert back. If you want more information on your hospital's policy, then they're going to make that readily available to you. Probably should've gone over it during orientation, but nobody remembers that. I would assume that management is already having meetings discussing their protocol.

Rich Smith: That's exactly right. And that was our answer back on the two, we've gotten two emails so far. What happens if this happens? Well, we are going to, as a company, default back to every hospital's policy. It's silly for us to make a policy. That wouldn't make any sense at all.

Hannah Bryant: Right. We are not healthcare professionals. Well, a few of us are, but we are not.

Rich Smith: But we have no idea what's happening at that facility level. And we're going to put our trust in those people that are managing those facilities right now to make that policy. And then we're just going to follow their policy.

Hannah Bryant: And they exist.

Rich Smith: Yeah. Don't think for a second that they're not because every one of them has a plan right now.

Hannah Bryant: Otherwise, just wear your mask. It's something. I don't know if that's the proper to say.

Rich Smith: We have actually had a hard time ordering N95 masks. It's happening. Yeah. It's actually happening where they are in short supply.

Hannah Bryant: All the people traveling at the airports. That's where they are.

Rich Smith: That's exactly right. Hannah, thank you so much. I know it's-

Hannah Bryant: Thanks for having me.

Rich Smith: It's not always an awesome topic, but it's one that we have to talk about because especially when you get something, and you think if I were-

Hannah Bryant: Right. And there is the difference out there.

Hannah Bryant: So when you're not comparing, when you don't think you're comparing apples to apples, it's nice to have that clarity of why somebody does it, why someone doesn't.

Rich Smith: If I would suggest the Zicam with elderberry, it's delicious and it helps shorten colds. I think it's helping. I don't know.

Hannah Bryant: You should put it in pancakes like you would blueberries.

Rich Smith: Oh. Elderberry. I couldn't even tell you.

Rich Smith: Do they grow on trees? I don't even know.

Rich Smith: She's making that up. I don't think so.

Hannah Bryant: I know someone who makes elderberry jam. It's quite a process. You have to have a lot of sugar.

Rich Smith: If you want some elderberry jam, Hannah would hook you up.

Hannah Bryant: Not personally, but okay.

Rich Smith: See you next week.